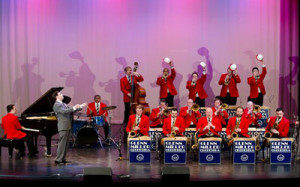 A big band that’s been consistently touring the globe since it was launched by an Iowa native in the late 1930s is making two stops in Iowa this week. Nick Hilscher is the leader of the 20-piece Glenn Miller Orchestra, which still plays about 300 dates a year worldwide.

Why does Big Band music endure? “It’s romantic, it’s well-written, the melodies, the harmonies, and of course the rhythm, the feel of the music,” Hilscher says. “It’s very unique.” While they don’t try to be a cookie-cutter replica of the original band, Hilscher says they present the classic music to the audience very authentically.

The 36-year-old Hilscher says the typical audience for the band’s show will be widely varied in age, from senior citizens to seniors in high school — and much younger.

“Of course we have a good number of folks from the Greatest Generation, the World War II generation who come to the shows,” Hilscher says. “Then, I find a lot of 11-year-olds, middle schoolers, high schoolers, even college-age students who come to the performances because at some point in their lives, they were turned on to this music and they’re excited to see the band.”

Since Miller was a Clarinda native, Hilscher says they’ll dust off a few special songs in Coralville and Des Moines this week which listeners may not have heard in several decades. The band typically tours with sheet music for about 250 songs but the Glenn Miller library is 2,000 songs deep.

The band plays in Coralville on Wednesday and Des Moines on Friday.