You are here: Home / Fires/Accidents/Disasters / Rock Valley not letting flooding wash them out as RAGBRAI stop 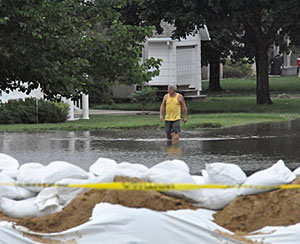 A man walks through flood water in Rock Valley on June 18th.

Officials in Rock Valley say they will continue with plans to host this summer’s big bicycle ride across Iowa despite last week’s flood that heavily damaged the northwest Iowa town.

Mayor Kevin Van Otterloo says it was not a decision that was taken lightly and any money generated by the RAGBRAI stop will have a distinct purpose — to help residents who were displaced and to repair damaged property.

“The city council has already announced that any proceeds that come from this will go directly into the flood relief program,” Mayor Van Otterloo says. “We’re not going to forget about the people that are up front. We do have some RAGBRAI people coming in this weekend that are going to help with the clean-up again from other towns.” Funds have been set up at the three local banks.

The Rock River crested last week at Rock Valley some 11 feet over flood stage, breaking records set in the Flood of 1993. At least 150 homes in the town were damaged. The Rock Valley RAGBRAI Committee will make arrangements for housing in the coming weeks, as some of the people who were hosting bicycle riders have seen damage to their properties.

Van Otterloo says the recovery is going well, but it’s slow. “The clean-up on the outside is doing really well, for the streets and everything like that,” he says. “If you came in now, you probably wouldn’t be able to tell we had a flood. It’s inside the homes now where people don’t see it. A lot of these people, their houses have taken a huge hit. We’re going to have another massive clean-up day on Saturday for everybody here.”

The mayor says it was overwhelming to hear from so many mayors and other community leaders from nearby and far away, offering to help in the recovery process, along with the many hundreds of volunteers who showed up. “That was really humbling watching the sandbaggers out there last week,” Van Otterloo says. “It didn’t make any difference which school you went to, which church you went to, which town you came from, what the color of your skin was, it didn’t make any difference. They were all standing there together as brothers and sisters and working together to stop that water from destroying homes.”

More volunteers are needed on Saturday to help with the clean-up. Call the Rock Valley city office, or the help line, 712-451-HELP. RAGBRAI kicks off in Rock Valley on Saturday, July 19, with riders leaving to head towards Okoboji on Sunday the 20th.

Photo courtesy of the Governor’s office.