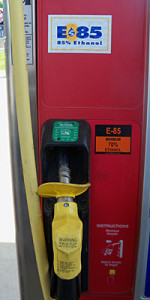 The Iowa Renewable Fuels Association (IRFA)  says motorists in the state bought more than 2.7 million gallons of E-85 in the first quarter of this year.

The E-85 fuel contains from 70 to 85 percent ethanol mixed with gasoline. Shaw says several factors have led to better E-85 prices. “Right now you have oil prices elevated because of world tensions, you have ethanol prices down, corn prices down,” Shaw says. “In the first quarter it wasn’t this good, but right now today in the wholesale market, you can buy E-85 for literally half the price of regular gasoline.”

There is some loss in the number of miles you get to the gallon with E-85 compared to straight gasoline, but lower prices for E-85 make up that difference. “There are some people like me who are going to buy E-85 no matter what, because we want to buy the home grown product, it’s cleaner burning product. And so, that’s not as much price driven,” according to Shaw. “A lot of people do look at the price. Usually when you see about a 30 to 40-cent price spread, you are going to start getting sales.”

Shaw says retailers are finding a big difference in the price they pay for E-85. “If you go to the right spot, you can actually buy E-85 — this is wholesale — for a dollar 64. So, you’re looking at a buck and a half savings here,” Shaw says.

He says in most cases retailers aren’t adding that much onto the price they pay for wholesale E-85 and that’s where the savings come in for consumers. “Some retailers are locked into contracts with big oil companies, and they don’t necessarily pass all the value of the ethanol savings along to consumers. So if you’re a retailer out there, you’re gonna want to shop around. We have an E-85 wholesale price service on our website,” Shaw says

He says retailers may be able to buy E-85 at a very low cost directly from a plant and trucking it in won’t add that much cost. Shaw says E-85 is now sold at more than 200 sites in Iowa. He says you should check your vehicle’s owners manual to determine if you can burn E-85.