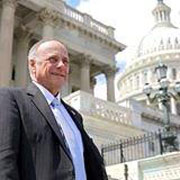 Congressman Steve King says the U.S. should be negotiating the return of thousands of unaccompanied children who’ve flooded across the U.S. southern border. According to King, “no country in its right mind” would do what the Obama Administration is doing and place those children with relatives in the United States.

“Violating the law and completing the crime and putting these children into households where there’s an illegal mom or an illegal dad or both,” King said this week during a congressional hearing.

King said the Obama Administration quit deporting children brought into the U.S. illegally in 2012 and that news has “echoed out” into Mexico and Central America.

“Families who’ve abandoned their children and pushed them across a thousand miles of Mexico and handed them over to the Border Patrol,” King said. “And now the HHS is going to deliver them into these households and not enforce the law? This is so appauling to me.”

King, a Republican from Kiron, has been a leading voice against efforts to grant some form of legal status to illegal immigrants already living in the United States. King said the U.S. should use a “gentle hand” in dealing with these kids — some as young as three — who’ve walked across the border, but King says the children should be returned to the “donor countries.”

“This is the tip of the iceberg,” King said recently on CNN’s “New Day” morning show. “It will get a lot greater if we don’t shut this down.”

According to King, U.S. foreign aid to Mexico and Central America should be reduced until those countries respond to the crisis.

Border Patrol agents can legally bar any Mexican children at the border from entering the U.S., but children from non-contiguous countries like El Salvador, Guatemala and Honduras must be taken into custody and transferred into the care of the Office of Refugee Resettlement. That agency is then trying to find relatives or guardians who will care for those kids as they await deportation.