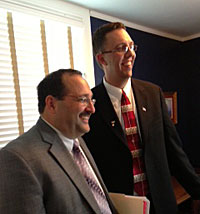 As expected, the Iowa Republican Party’s governing board has chosen a new chairman.

Former state Representative Jeff Kaufmann of Wilton was elected at the Iowa Republican Party’s state central committee meeting this afternoon. He immediately set the goal of raising $300,000 for the party over the next three months, to help finance a get-out-the-vote effort for the Republican candidates on November’s ballot.

“And yes, we’re late, but we’re not late because of today. We’re late because of many, many, many mistakes. We’ve got to roll,” Kaufmann said during a speech to the party’s governing board. “But you know what? We would be in this predicament regardless because we’re behind the eight ball. The Democrats are ahead of us in many areas. We’ve got to play catch-up and then we’ve got to surpass them.”

AUDIO of Kaufmann’s remarks after being elected Iowa GOP chair, 12:30

Kaufmann replaces Danny Carroll, a former lobbyist for the Christian conservative organization The Family Leader, who had served as the party’s chairman for just three months. Loras Schulte of Norway, Iowa, led the effort to dismiss Carroll and bring in Kaufmann.

“I am very aware that there are individuals who will see this as just a tit for tat. It is emphatically no such thing,” Schulte said. “Rather it is a heartfelt desire by the new committee to demonstrate that no individual, organization or entity has undue sway inside our party.”

In late March Carroll had taken over as chairman from A.J. Spiker, who came from the party’s “liberty movement.” Kaufmann argued that during his eight years as a state legislator, he was at various points accused of being allied with all the factions of the party, including “moderates” and “the establishment.”

Today’s party leadership maneuver, plus the hiring of a new party executive director, are the culmination of the effort Republican Governor Terry Branstad launched in January’s precinct caucuses to ensure the new state central committee that took office on June 14 could take the reigns of the party away from those directly allied with Ron and Rand Paul.

Carroll had the task of convening the meeting at which he was fired.

“This is a weird deal. I’ve never presided over my (own) termination…This is an awkward moment for all of us. I don’t deny that,” Carroll said. “…While I can admit my faults and shortcomings, I don’t think I’ve commited any offense that requires dismissal or replacement.”

Tamara Scott, one of the Iowa Republican Party’s representatives on the Republican National Committee, denounced the move to replace Carroll.

“To expend such energies ousting our own rather than ousting Democrats in November has been hard to see,” Scott said.

Scott abstained from voting for Kaufmann as Carroll’s replacement and she did not participate in the non-confidence vote in Carroll either. She suggested Carroll’s ouster was orchestrated by large donors who want to be owners of the party.

“See we’re condemning a good man today not because of anything he’s done or hasn’t done, (but) simply because he’s in the way of something someone else wants to do,” Scott said.

AUDIO of committee deliberations over Carroll, 47:00

In other action this afternoon the party’s board of directors elected Cody Hoefert of Rock Rapids as co-chairman of the Iowa GOP.

“I ask for each of you to join our cause, to be motivated, to work hard, to make the sacrifices,” Hoefert said in a speech to the Iowa GOP’s state central committee, “and to every night offer up prayers that we lead and do the right thing.”

Hoefert, who is 36 years old, is a chiropractor. His home was among those flooded this past week as torrential rains struck northwest Iowa.

Kaufmann, who is 51, is currently a member of the Cedar County Board of Supervisors. He is also a professor at Muscatine Community College.