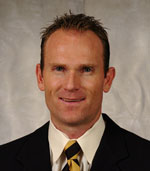 Former UNI track star Joey Woody will be leading another in-state program. Woody has been named the director of the track and field and cross country programs at the University of Iowa, where he had been an assistant coach the past eight seasons.

Woody says his first order of business will be to communicate his vision for the program. “Obviously our main focus is being a Big Ten championship level program and then continuing to develop as a national level program,” Woody says.

Woody says he believes that some of the pieces are already in place to help make the Hawkeyes a contender in the Big Ten. He says they have a great nucleus of athletes returning and had a good showing at the national championships. Even with his new role as director of the programs, Woody says that he will continue to work with Iowa’s athletes on a day-to-day basis.

Woody is an Iowa City native. He won the 1997 NCAA Championship in the 400 hurdles while attending UNI, becoming the program’s first national champion. He also took second place in the same event at the 2003 World Championships.