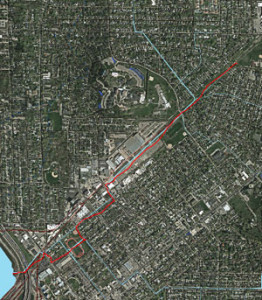 The map shows the sewer line that carried one teen a mile-and-half in floodwater.

A search is underway in Cedar Rapids for a teenager who was pulled into a storm sewer drain by rushing water.

Cedar Rapids public safety spokesman Greg Beulow says two teens were walking to an elementary school to play Frisbee when one got pull away by flood waters. “The first teenage who went in –Logan Blake age 17 — was in the water and apparently got swept away and went into the storm sewer drain,” Buelow explains. “His friend, David Bliss went in shortly thereafter to try and rescue him. Somehow David went through the storm sewer system, almost one-and-a-half miles through the underground system to the exit drain pipe which deposits into Cedar Lake.”

Buelow says it was a amazing that 17-year-old David Bliss came through the pipe without major injuries. “The force of the water was so great that it removed his clothing and everything, and somehow he was able to go about three blocks to St. Lukes emergency room and get assistance,” Buelow says. Everything happened around 7:20 last night.

Police and firefighters searched for Logan Blake until around one this morning before calling things off for the night and then starting again at 7:30. “Firefighters and police officers have resumed a land search around Cedar Lake, as well as along the storm sewer system between Arthur Elementary school and Cedar Lake,” Buelow says. He says they also have boats on the water using sonar. The urban search and rescue team has a camera that can go into the sewer system and look for the missing teen.

The sewer pipe is four-and-a-half feet wide where the teens went in and Buelow says it expands to 10 feet at the point where it dumps into the lake. He says it can carry a large volume of water. “If it was three-quarters full it could have had up to 67,000 gallons per minute flowing through there,” Buelow says.

Buelow says it is a tragic situation. “It’s just another indicator of how dangerous flash flooding can be. In fact it’s the number one weather killer just because that water moves so swiftly,” Buelow says. Buelow says Blake’s family is on the scene and rescuers are hopeful they may still find him alive.