You are here: Home / Fires/Accidents/Disasters / Statewide average rainfall of 9.61 inches in June — third wettest June ever

Rain gauges in Iowa were often full in June.

State Climatologist Harry Hillaker says preliminary data indicates June of 2014 will rank as the third wettest June since weather records have been kept in Iowa.

Torrential rain in some locations around the state are setting records.

“Northwestrn Iowa, you typically think of that part of the state being the drier part of Iowa — which in most years it is, the highest total I’ve had a chance to track down yet is at the Sioux City Airport,” Hillaker says. “The 16.65 inches there which was easily the most rain they’ve ever had in a calendar month on record at that location.” 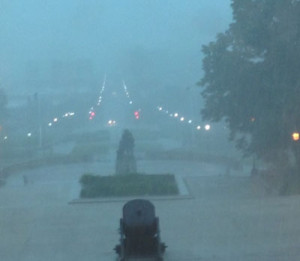 Heavy rain Monday blocks out most of the view from the state capitol.

Radar indicates some spots in Woodbury County received 20 inches of rain during the past month. In mid-June in Lyon County, there were evacuations in Rock Rapids after torrential rains and the city’s drinking water plant had to be shut down after it was swamped by flood waters.

“In those northwest Iowa locations, in most situations, it’s going easily to be records for any calendar month, not just wettest June, but wettest months in places like Rock Rapids and Sioux City,” Hillaker says. “And the list will be growing as we get a chance to look at all the data as it comes in.”

Eastern Iowa has lately been subjected to Mother Nature’s spigot, but Red Oak still holds the official state record for wettest month ever. Just over 22 inches of rain fell in Red Oak in June of 1967.

“A northwest Iowa location, back in 1926, holds the unofficial record for one-day rainfall of 21.7 inches, which was in Sioux County,” Hillaker says, “so sometimes you just get ridiculous amounts of rain in a short amount of time.”

Hillaker calculates the statewide average precipitation for just the last half of June was over eight inches. According to Hillaker, that “is an awful amount of rain in a short amount of time.”

“Somewhat reminiscent of what happened in late May and early June of 2008 when we had the big Cedar Rapids flood,” Hillaker says. “We also had a tremendous amount of rain over a very large area in a rather short time.”

Hillaker says the difference between June of 2008 and 2014 is that May was a “relatively” dry month for all but the northwest part of the state and there were “very dry conditions” during the last half of 2013.