You are here: Home / Fires/Accidents/Disasters / Grassley calls damage from storms and flooding “shocking” 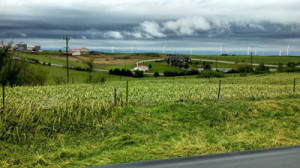 Crops flattened by a storm near Adair.

Floodwaters are still rising in parts of eastern and southern Iowa after heavy rains earlier this week. Several severe storms in recent weeks have caused many millions of dollars damage to homes and businesses, crops, roads and bridges.

Iowa Senator Chuck Grassley is in eastern Iowa for town hall meetings this week and called from Muscatine.

Grassley says it’s possible Iowa will qualify for federal aid. Grassley says, “If it’s determined that the federal law threshold has been met for federal disaster requests, I will very promptly urge President Obama to approve the request from Governor Branstad.”

The governor’s office says disaster proclamations have been issued for 51 counties in the past month following severe storms on June 3rd, 13th and 26th. The state declarations allow for the use of state resources in the disaster response process, but the federal dollars would bring more tools for rebuilding and recovery.

Grassley says, “The damage is great and there’s loss in agriculture and of both private and public property.”

Flooding and storm damage has forced the closure or partial closure of at least a dozen state parks, heading into the 4th of July holiday, what’s typically a very busy camping weekend.