You are here: Home / Agriculture / Plant in Galva using fiber as well as starch from corn kernel to make ethanol 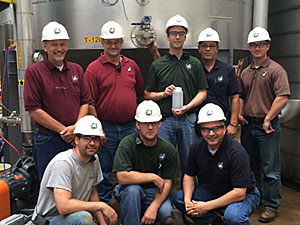 A farmer-owned facility in northwest Iowa has produced the first gallons of “cellulosic” ethanol in the state and, perhaps, the world that’s made from the fiber of a corn kernel.

“What we are doing is taking the corn starch ethanol out and then we are fermenting the fiber and the remaining portion that’s left to create cellulosic ethanol out of the corn kernel fiber,” Johnson says.

That fiber is what gives the kernel its “hardness”, according to Johnson.

“And the cellulose that’s in that corn kernel is able to produce an extra six percent ethanol out of a bushel of corn compared to what we were doing when we didn’t convert the corn kernel fiber,” Johnson says.

While other plants are being designed and constructed to make cellulosic ethanol out of corn stalks, the facility in Galva is able to use the corn kernels that are already being delivered there.

“It’s the most simplistic way to make cellulosic ethanol out of any of them out there because the product is already here and the transportation and logistics of any cellulosic component is usually the most difficult,” Johnson says.

Ethanol, corn oil and dried distillers grain continue to be the byproducts of processing corn kernels at the plant, however Johnson says there’s triple the amount of corn oil from this new technology, plus the dried distillers grain contains less fiber and more protein, making it more attractive to livestock producers. A group of investors formed Quad County Corn Processors 14 years ago and the facility began producing ethanol 12 years ago.