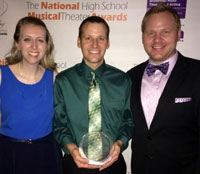 A northeast Iowan is among only four teachers in the nation chosen for this year’s Educator Apple Award from the Broadway League.

Brian Sammons, who teaches third grade at Aplington Elementary School, went to New York City this week to claim the award. Sammons had his class start a pen pal relationship with actress Hayley Podschun, who played Glinda in “Wicked,” then took the students on a field trip to Des Moines to see her on stage.

“When we had the third grade students down there during the show, she makes this appearance from a bubble that comes down from the ceiling on the stage,” Sammons says. “You would’ve just been amazed when you heard those kids scream out her name and cheer for her like she was the most famous person in the world in that theater that day.” The students also got to meet Podschun after the show.

Sammons says the actress was incredibly accommodating in communicating with the youngsters over the course of many months. “We email, we Skype every once in a while,” Sammons says. “The biggest thing I enjoy doing the most is incorporating it as much as I can into our reading, our social studies, our science and math and our writing.” Podschun also shared all should could with the small-town Iowa students about life in the big city of New York and being on tour.

Sammons says it’s been an inspiring process for his class. “We’re so fortunate in Iowa to have so many great arts opportunities,” Sammons says. “Getting kids started young in the arts is really important. It’s not something that is just an optional activity. I really feel that the arts for kids helps them learn and grow and possibly be future artists themselves.”

The Apple Award acknowledges the efforts of local educators who promote further development of theater education. Sammons was nominated by Des Moines Performing Arts, a member of the Broadway League.