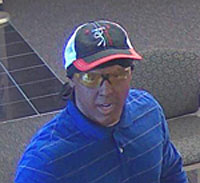 A bank in Cedar Rapids has been robbed twice in less than two weeks. Cedar Rapids Police say a man entered a Guaranty Bank on the city’s northwest side shortly after 10 a.m., displayed a handgun, and left with cash.

No one was injured. The same Guaranty branch was robbed on June 25. There have now been 8 bank robberies in Cedar Rapids this year.

The suspect in this latest bank robbery is described as being a white male with dark skin or a black male with light skin wearing a dark blue button-up polo shirt that had white pinstripes. He was also wearing blue jeans and a black cap that had white and gray on it with a red border.