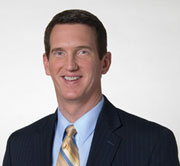 A TV meteorologist on a family vacation in Iowa City was seriously injured in a fireworks accident Friday.

Forty-eight-year-old Dave Rexroth has lost the vision in his left eye and is hospitalized in Iowa City according to a story posted on the website for the TV station in Detroit where he works. Rexroth is scheduled to undergo surgery on Wednesday. According to the WXYZ-TV website, the surgery “will begin the process of Dave receiving a prosthetic eye.” He expects to fully recover by September.