You are here: Home / Business / Thousands of Iowans to receive refunds from buying club cases 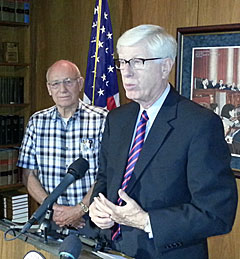 More than 400,000 Iowans will be getting refund checks in connection with three buying club cases. Iowa Attorney General Tom Miller says his office has been seeking the refunds from the various companies for more than a decade. “The whole idea, the whole business plan, is not to sell you something. It’s to trick you,” Miller said at a news conference today in Des Moines.

The refunds are the result of last year’s Iowa Supreme Court decision against the defunct Connecticut-based marketing company Vertrue, Incorporated. The company, Miller said, tricked Iowans into paying fees for memberships that most didn’t know they had and didn’t use.

Iowans who’ll be getting refunds should be receiving postcards this week containing information about the cases. In most cases, the refund checks will range from $5 to $40. “A few of them are going to be larger,” Miller said. “There were 864,000 memberships for 400,000 Iowans. Some Iowans had multiple memberships and for some Iowans, the money built up into the hundreds of thousands of dollars.”

Affinion Group agreed to pay the state $5.5 million and Stonebridge Benefit Services, which is affiliated with JC Penny, was ordered to pay $2.7 million. Richard Schultz of Des Moines is among the Iowans who’ll be getting a refund. The 75-year-old believes he joined a buyer’s club roughly eight years ago, but didn’t realize he’d be charged a monthly fee. “I presume it started shortly after my wife passed away and I probably wasn’t really aware of what was going on at the time,” Schultz said. He’s due to receive a refund of roughly $1,500.

Schultz said he didn’t notice the monthly charges on his credit card bills. “I do feel like I’ve been duped…but I’m thankful that the Attorney General’s office has stepped in and looked into the matter,” Schultz said. “I hope that this is going to nipped in the bud.” The refund checks are to be mailed to Iowans in October, November, and December.