You are here: Home / Education / University of Iowa spending thousands of dollars on marketing campaign 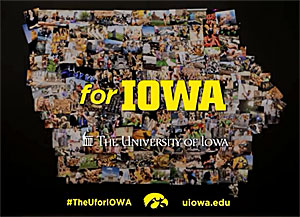 The University of Iowa is spending $765,000 on a marketing campaign.

The University of Iowa is launching a marketing blitz that’s directed at potential in-state students.

Joe Brennan, U-I Vice President for Strategic Communication, says the effort is partially in response to the Board of Regents policy change, which will link the amount of funding from the state to the number of in-state students enrolled at each school.

In addition, Brennan says the University of Iowa is poised to grow. “We have just about finished recovering from the flood of 2008, we’ve got new buildings opening in 2016, and a new residence hall coming on-line next year,” Brennan said.

The U-I is spending $765,000 on the campaign, which will involve pitches on TV, radio, billboards, newspapers, and social media. “We see this as an investment in the growth of the university,” Brennan said. “This is just the first step. If this is successful, we plan additional campaigns in the fall and the spring.”

The university also plans to reach people through an expanded presence at the Iowa State Fair and on RAGBRAI. Brennan said the university’s admissions staff will also line up visits to every high school in Iowa. The University of Iowa’s enrollment has held steady, between 30,000-31,000 students, since 2008.

Here’s a TV ad for the campaign: