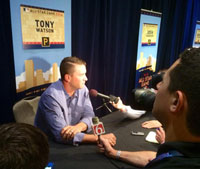 The state of Iowa has a Major League Baseball All Star for the 3rd time in the last four years. Former Dallas Center Grimes prep Tony Watson is on the National League team as a relief pitcher for tonight’s MidSummer Classic.

Watson is making his first All Star appearance and says the experience so far has been incredible. “It’s awesome, this is it, this is all the best players in our profession. To be here with these guys and to see them with their families and see how excited they are — I’m on cloud nine right now, just trying to enjoy the experience,” Watson says.

Watson is in his fourth season with the Pirates and says he learned of his selection in front of the entire team. He says to get hugs and handshakes from the staff and team meant a lot. Watson says he’s excited for the chance to represent his home state on one of baseball’s biggest nights, especially when it’s a 3-hour drive for people to come and see him.

Watson isn’t sure yet if he’ll be called upon to throw an inning for the NL, but says getting into the game would be a dream come true. Watson has won 5 games and lost only once in just more than 44 innings so far this season. He graduated from Dallas Center Grimes in 2003 and was a 9th round pick by the Pirates in 2007.