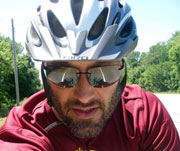 A travel writer who grew up in eastern Iowa is releasing his latest book just in time for the start of the world’s largest bicycle ride. RAGBRAI  begins this weekend. Brian David Bruns rode the statewide bicycle ride in 2011 and published “Rumble Yell” as a monument to his surviving the week of heat, humidity, hills, bugs and 500 miles on a bicycle seat.

“What I really wanted is to write a book for, for example, my mother who is never going to ride RAGBRAI,” Bruns says. “RAGBRAI is one of those things that all Iowans know about, we should all be proud of it, but so many of us haven’t done it and have no intention of doing it, so I want them to understand that experience.”

Bruns is a Hiawatha native who now lives in Las Vegas, where he trained to ride in the Iowa heat. He grew up knowing about RAGBRAI but never considered taking a week out of his life to make the journey by pedaling across the state with ten-thousand-plus other cyclists. “Everything that I thought the ride would be about, it was not about,” Bruns says. “I never appreciated small-town Iowa so much in my life. I discovered RAGBRAI is not about bikes, it’s about people, and that’s something to be proud of because Iowans are very nice, very friendly folks.”

As a travel writer, Bruns says he’s visited more than 50 countries. He says sometimes you have to leave home to make you appreciate home all the more. Many of the riders on RAGBRAI aren’t from Iowa, he notes. “Growing up in Iowa I was like, ‘Why would you want to come here?’, but then I realized just how much the place has to offer,” Bruns says. “Meanwhile, there’s a lot of locals that are taking their vacationtime to stand out in their front yard and refill water bottles for thirsty riders. It’s just this aura of positivity that was through the roof. It was amazing.”