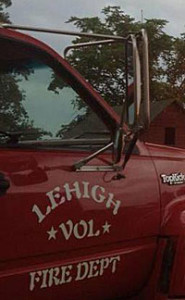 The volunteer fire chief of a small north-central Iowa town is almost a month into a hunger strike as he’s trying to raise money to build a new fire station. Lehigh Fire Chief Kirk Kelley says other fundraisers they’ve tried in Webster County met with little success, so he decided to abstain from solid food for as long as it takes to bring in the needed bucks.

His daily diet is on the light side now. “Two protein shakes, I have fruit juice, I drink chicken broth, that’s usually my nightly meal,” Chief Kelley says, laughing. “You know, you’ve gotta’ have chicken at night. Chicken or beef broth, one or the other.”

He says he did consult with a doctor before going on the new diet and it’s not causing him any trouble at his regular job as an electrician or in his position as the town’s volunteer fire chief in the 17-person department. “It’s been rough but not rough in the sense that most people think,” Kelley says. “I really love cheeseburgers and fries and that’s been getting to me.”

The chief admits he did need to lose some weight anyway, so the fire station fundraiser seemed like a good fit. Before he started the strict liquids-only diet, the five-foot-11 Kelley tipped the scales at 280 pounds. “When I started practicing, trying to get my body used to eating less instead of going right to liquids,” Kelley says. “When I started to fast on June 23rd, I weighed 258 pounds. I weigh 230 now. I could probably afford to lose another 20 at least and still be a nice-sized guy.”

The current fire station measures only 30-by-60 feet and dates to the early 1960s. He says it’s far too small and inefficient — and the modern vehicles hardly fit inside. The fundraising goal is $480,000. So far, about $5,000 has been raised.