You are here: Home / Sports / Watson enjoys one pitch, one out in All Star game 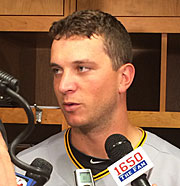 Tony Watson after the All Star Game.

It was a late entrance and an early exit for Iowa’s baseball All Star last night. Pitcher Tony Watson came out of the bullpen to begin the 8th inning for the National League squad, but only ended up throwing one pitch, as he induced a fly out from White Sox slugger Jose Abreu. “He told me I was just going to have the first hitter, so I just wanted to go out there and just have fun with it and enjoy it and try to get him out,” Watson says. “Pitching in the Major League All Start game is a thrill, very exciting.”

Watson says he wasn’t disappointed to only get to throw a single pitch. “I was just thrilled to come in at all. I didn’t have to ice my arm or anything, just one pitch and really enjoyed it,” Watson says. He says to get to meet the other players and share baseball talk was a great time with the two days flying by.

As one of twenty five players playing in their first All Star Game, Watson says he’s hopeful for a chance to get back. He says other guys were talking about how much fun it was and says it would be great to come back. The National League lost the game to the American League 5-3.

Former Cedar Rapids Kernel Mike Trout, now in his third season with the Angels, was selected as the game’s Most Valuable Player after driving in two runs and scoring another.