You are here: Home / Business / State economic development officials use nostalgia as part of their pitch 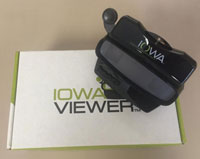 A Viewmaster used to promote Iowa.

New versions of vintage toys from the 1950s and ’60s are helping to prod business leaders around the nation into building their next facility in Iowa.

Tina Hoffman, spokeswoman for the Iowa Economic Development Authority, says about 2,500 key corporate leaders across the U.S. are receiving green-and-white care packages from the Hawkeye State.

“We have a targeted list of prospects that we’re going out to,” Hoffman says. “One of the things that we’ve done is to send them things that are kind of different, that they’ll keep on their desk and will put Iowa at the top of their mind when they are considering their next business expansion or relocation project.”

One of the incentive gifts is a rebranded Viewmaster. It resembles a pair of binoculars but instead of being used to see far-away objects, several color photos of Iowa are pre-loaded in the devices.

“We have included with them one disc and there are about eight pictures,” Hoffman says. “It talks about everything from quality of life to business climate to commute times, all of those things that are important when you’re looking at a new business location.”

While stereo-scopes were around decades earlier, the Viewmaster became a very popular toy starting in 1966, so there’s a clear, nostalgic appeal to business leaders who are in the Baby Boomer Generation.

“We also have done the Magic Eight Ball,” Hoffman says. “That’s a pretty cool thing. When you ask the Eight Ball a question, the answer always comes up, ‘Iowa.’ There are several different specific answers but ultimately, it’s always Iowa.”

Each device costs about $15 but Hoffman says it’s worth the price. Since January of 2011, she says the office has been working with projects that will result in more than $9 billion in capital investment in Iowa.