You are here: Home / Agriculture / Fayette County dairy looking to expand market for its yogurt 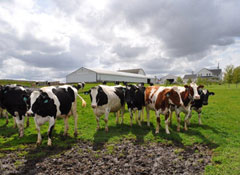 Business is booming for Iowa’s only on-farm yogurt store. Country View Dairy is located near Hawkeye in northeast Iowa’s Fayette County. Dave and Carolee Rapson have been milking about 150 Holsteins since 2002 when they moved to Iowa from Michigan.

Things went pretty smoothly until 2009, when milk prices hit all time lows and feed prices tripled. Dave says they realized expanding the farm wasn’t an option, so it was diversify or disappear. “We checked out ice cream, bottled milk, cheese and cheese curds. We decided on yogurt, due to it’s the fastest growing dairy product and the most value added,” Rapson said.

Before the Rapsons broke ground on a facility to process the yogurt, they did a lot of research, traveling around the country looking at other dairy operations and meeting with inspectors. Lastly, the Rapsons needed to figure out what to do with the product once it was ready for public consumption.

The Rapsons are Mennonite, so there’s not a radio or a television on their property. Marketing professional Bob Howard has the job of explaining why Country View Dairy yogurt looks different, but tastes better than any other yogurt. “It’s a non-homogenized product, so there’s a cream layer on top of every cup that you open,” Howard said. “We can manage the quality control a lot more when the milk never leaves the farm and within 12 hours from milking the cows, it’s fresh in the cup and ready to sell.”

Howard started out going from store to store and handing out samples at Farmer’s Markets. And now? “We’re looking to expand our reach the Upper Midwest. We’re technically in seven states, but we’re ready to grow bigger,” Howard said. On-farm stores are expected to increase by 25 percent in the next year in Iowa, with the addition of four to the 16 already selling everything from cheese curds to ice cream.