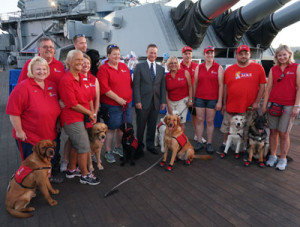 Actor Gary Sinise (in suit) at the fundraiser on the USS Iowa.

A Hollywood actor who portrayed a soldier in an academy award-winning movie is helping raise money for a variety of veterans causes, including repair of the USS Iowa.

Gary Sinise — who played the character Lieutenant Dan in “Forrest Gump” — hosted a fundraiser last night aboard the ship, which is now a floating museum in the Los Angeles harbor.

Becky Beach of Des Moines, the founder of the “Puppy Jake Foundation”, was there because a portion of last night’s money haul is going to help her group that trains service dogs for veterans.

“All Lieutenant Dan wanted to do was honor veterans and serve his country well and that’s what he’s trying to do with his Gary Sinise Foundation,” Beach said this afternoon via telephone. “He mixed and mingled with the folks. He very graciously spent quite a bit of time with the Puppy Jake volunteers and the dogs and then, after his remarks, he presented the honorees with their awards and it was quite moving.”

Three severely wounded soldiers and their primary caregivers were honored, including Cedar Falls, Iowa native Taylor Morris, a Navy sailor who lost both legs, his left arm up to the elbow and his right hand in a bomb blast in Afghanistan. Sinise is a leader in the “Hope for the Warriors” non-profit group and last night’s event raised money for that organization as well. The USS Iowa needs more upgrades and some of the proceeds from last night will help in that effort.

“The battleship is up and running,” Beach said. “We’ve got record attendance, but there are tremendous needs still to be done.”

Beach has also worked to raise money to save the ship and make it into a museum. She said the deck, which is made of teak wood, needs to be restored. The ship will soon have running water and restrooms on board. The next goal is to raise enough money for lifts or elevators that can help get people from the dock onto the boat.

“The reason it’s so critical is, as you know, we are losing WWII veterans daily unfortunately and they come to the ship and it’s difficult for them to get on board,” Beach said. “Having said that, the crew makes every arrangement and gets them on board, but we want to make it much easier so people can just simply come and go up an elevator lift and the teak deck plays a role in that because the deck is not even in some places for wheelchairs.”

Beach, often seen around Iowa with a puppy she’s training to be a service today, is at Disneyland this afternoon with a small group of other “Puppy Jake Foundation” volunteers who are in LA with eight dogs-in-training. Beach said taking mass transit in LA and going to public places like Disneyland will help train the dogs to handle the stress of large crowds when they’re matched with a veteran who needs a service dog.