You are here: Home / Human Interest / Hat Lady to be remembered in event at Heartland Museum 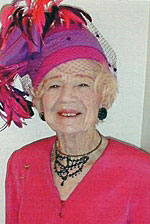 The woman who was known as Iowa’s Hat Lady will be remembered with a special event next week at the Heartland Museum in the north-central Iowa town of Clarion. Alvina Sellers was famous for her remarkable collection of 6,000 hats and her enthusiastic presentations about them.

Her daughter, Sandra Sellers Hansen, will host the program highlighting the life of a woman who delighted so many others. “I will be talking about Mother, my memories of her and her achievements,” Hansen says. “We’re inviting ladies, we’re calling it a tea, to come and bring daughters and granddaughters and to wear hats, if they should choose.” Alvina Sellers gave presentations in all 99 Iowa counties, in 25 states and on numerous TV programs, including Late Night with David Letterman in 1987.

Hansen says her mother was well known for her presentations at the Iowa State Fair, as well. “She loved people and she loved entertaining and inspiring people,” Hansen says. “If you’re speaking to an audience, you can tell right away whether they are responding to you and interested. Her audiences just responded to her and loved her. You couldn’t get to her after a show was over, people crowding around her, wanting to talk to her.”

Sellers died in June of 2003 at the age of 87. Just a month before, in May of 2003, she gave her final talk in Minnesota, after more than 56-hundred presentations. During her travels, Hansen bought some hats for her mother, many of which are now on display at the museum in Clarion. “One of my great pleasures was to go shopping in New York City and go into Sac’s Fifth Avenue or some other elegant establishment, see a beautiful hat and say, ‘Send it to this farm in Iowa.'”

The program entitled “Tea and Recollections” will be held Thursday, July 31st at 3 P.M. For details, call 515-602-6000 or visit www.heartlandmuseum.org