You are here: Home / Military / Ernst says it’s up to Braley “to refute” attack on his VA hearing attendance (AUDIO) 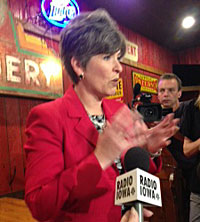 Joni Ernst, the Iowa Republican Party’s nominee for the U.S. Senate, says it’s up to Bruce Braley, her Democratic opponent, to explain why he missed 78 percent of the hearings held by the House Veterans Affairs Committee when he served on the panel.

“I think he should have been attending those hearings, obviously,” Ernst told reporters this morning. “I heard in one account he had said that he had to skip a meeting to go to another meeting and he didn’t actually go to that other meeting…but that’s up for him. He has to justify why he wasn’t there at a time when he was failing our veterans.”

Ernst, a unit commander in the Iowa National Guard, returned to the campaign trail this morning after two weeks of active duty. She spoke briefly at an early morning rally with about 150 veterans and National Guard soldiers and did not mention Braley by name or his attendance at VA hearings. The subject is now being pressed by a $2.4 million ad campaign against Braley. During a news conference, Ernst was asked if it was appropriate for the ad to accuse Braley of being AWOL — absent without leave — on veterans issues.

“Joni Ernst can choose to ignore Bruce’s long record of achieving results for Iowa’s veterans, such as securing overdue combat pay for 800 Iowa National Guard troops, working across the aisle to support disabled veterans, and helping thousands of veterans re-enter the workforce by providing businesses with tax breaks to hire veterans returning from duty,” Sam Lau, a spokesman for Braley’s campaign, said in a written statement. “But she can’t hide her extreme views…that put her out-of-step with Iowa’s middle class families.”

Ernst told reporters VA Hospitals should remain open, but she would support giving veterans vouchers or cards that they could use to obtain care at a local hospital or clinic, rather than forcing veterans to drive to a Veterans Affairs facility for care. According to Ernst, the problems with long wait times and substandard care have not cropped up at Iowa’s VA facilities.

“I wish I could say that in every state out there, but unfortunately we have had many, many issues and we need elected officials that are willing to take on these problems head-on — not ignore them, not bury their heads in the sand,” Ernst said during her speech at the rally. “We need to address these issues head-on and find solutions.”

(This post was updated at 11:22 a.m. with additional information.)