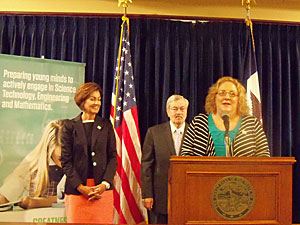 Governor Terry Branstad and Lieutenant Governor Kim Reynolds say a review of the STEM initiative shows the program has been successful in its first three years.

Reynolds is the co-chair for the STEM advisory council, which is working with groups across the state to increase interest in Science, Technology, Engineering and Math.

She says the review found several positive results. “For example,students who participated in the first year of the STEM scale-up programs reported more interest in STEM topics as well as STEM careers,” Reynolds says. “A small gender gap between male and female participation in scale-up has been narrowed from year one to year two, and that’s meeting one of our main objectives.

Reynolds says there are other indicators of success is that participation among minority students matches their share of Iowa’s school-aged population. “Awareness of the acronym STEM among adults has increased by 58 percent from 2012 to 2013,” according to Reynolds. “And in case we were not sure if any of this mattered to the average Iowan, I am proud to report that 98 percent of those adults surveyed agreed that advances in STEM will provide more opportunities to adults in the next generation.”

Boone High School science teacher Shelly Vanyo joined the governor and lieutenant governor to talk about her work with STEM. Vanyo says one of the first things she focused on was renewable energy. “It’s often viewed by students when I surveyed them as ‘oh my gosh it’s just something else that I have to memorize that doesn’t make sense to me.’ Because of that, one of the first scale-ups that I selected to participate in was Kid Wind. Because wind energy is prominent in Iowa, but I found even living in an area where we have wind turbines surrounding us, my students knew nothing about it,” Vanyo says.

She says the students took quickly to the program. “My classroom flourished and became a busy, problem-solving collaborative environment, where many ideas were explored at one time,” Sanyo says. “There was not one right answer that was brought to the forefront. Every student offered their own idea and their own ways to solve the problems that we face as global citizens.”

Vanyo says the process was contagious. “Learning was truly student led. I found that I had students who were not even a part of my class who would walk by and give their time during a study hall or lunch period to join the learning that was going on in my classroom,” Vanyo says. The report found over 3,000 classrooms and clubs involving more than 100,000 students were involved in STEM from 2013 to 2014.

Governor Branstad says it is a program that everyone has recognized is important, including legislators. “This is an issue that’s gotten broad-based bipartisan support every session and we’ve gotten the funding we’ve requested. And we’ve also gotten match. We’ve gotten great private sector match (of funding) as well,” Branstad says.

You can read the full report on the program at the STEM Advisory Council website at: www.iowastem.gov.

the area to see if they have a missing persons report that might match the victim.