You are here: Home / Crime / Courts / Finance company agrees to settlement involving members of the military 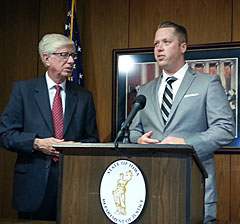 Thousands of military service members, including nearly 100 Iowans, will be receiving millions of dollars in debt relief after becoming victims of a predatory lender.

Iowa Attorney General Tom Miller says an agreement has been reached with Rome Finance Company. “It will provide 92 million dollars in relief for over 17,000 service members around the country, in regard to some outrageous price gouging and interest rates that have been charged to service members over the last few years,” Miller said at a news conference this morning at his office.

The agreement, which involves 12 other states, also requires Rome Finance to forgive debts and repair the victims’ damaged credit scores.

Iowa Air National Guard Staff Sergeant James Wilson, who grew up in Winterset, said he bought a computer that ended up costing $5,000 because of deceptively high interest rates. “I’m mostly angry and slightly embarrassed with myself,” Wilson said. The agreement forces Rome Finance to forgive his outstanding balance of $2,500.

Wilson said he signed up to purchase the laptop in 2010 and felt the online company appeared trustworthy. A statement on the website claimed the company was “military friendly.” The purchasing deal allowed the company to take a monthly payment directly from Wilson’s military pay. “The gentleman I spoke with on the phone and through instant messaging, as he helped set up my allotment…he was very friendly, thanking me for my service the whole time. He just walked me through it and made it really easy,” Wilson said. “From my perspective, it was just a simple way to get a laptop.”

Active duty military members are an easy target for predatory lenders, according to Wilson, since many enlist right out of high school. “I joined the military when I was 17 and I didn’t even have a checkbook at the time,” Wilson said. “I feel better knowing that this company isn’t able to do this to service members in the future.”

The agreement requires Rome Finance to liquidate. Miller said Rome Finance, which is based in California and Georgia, charged interest rates of up to 200 percent.