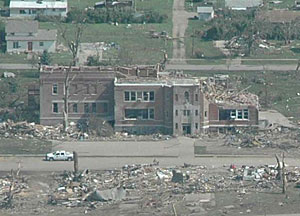 A school in northeast Nebraska that was damaged beyond repair in a tornado last month will reopen in a new location next month, thanks in part to a school district in northwest Iowa. The 105-year-old Wisner-Pilger Middle School in Pilger was demolished by the EF-4 tornado on June 16th.

Superintendent Chad Boyer says he got a call from the superintendent of the Sioux City Public Schools who asked if there was any way his district could help. “Through our conversations, they did have some furniture that they would like to donate,” Boyer says. “They were closing some buildings and they offered some furniture for our classrooms. We’re expecting about 70 desks, some tables, some shelving, just some things that will get our classrooms ready to go.”

The school has relocated to Wisner this fall where classes will be held in three modular buildings. Boyer says when school starts August 14th, those units will be ready to go. “Each modular unit has two classrooms with a good amount of space in each one,” Boyer says. “We were very pleased as we got on site and we were able to get into them and see them a little closer. We’re very pleased with the amount of space that we do have.”

Boyer says the furniture will be delivered free of charge by students in the Western Iowa Tech truck-driving program, while a dozen members of the Sioux City East football team will come along to move it.