You are here: Home / News / Racing and Gaming: no new gambling licenses for now (Audio) 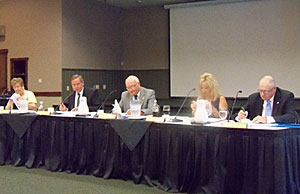 The Iowa Racing and Gaming Commission sent a unified message today that they are not interested in approving any new gambling licenses in the next few years.

Commission chair, Jeff Lamberti of Ankeny, started the discussion today on the heels of the recent denial of a license for Linn County and approval of a license for Greene County. Lamberti says he is against any moratorium on gambling, but he says the recent market studies and the work on new casino facilities needs to be considered.

“So on top of having studies indicate saturation of the market, we have these new facilities coming online and I think most of us believe we should let those get up and running before we would every consider any new license applications,” Lamberti says.

Lamberti says those factors led him to this conclusion. “As far as I am concerned for the remainder of my term on the commission — which is approximately three years — I really have very little desire to consider any new license applications,” Lamberti says. He says the commission should continue to watch how things develop. “It’s hard for us to predict the future and I believe we need to at least keep open the possibility of changing conditions,” according the Lamberti.

Commissioner Rich Arnold of Russell agreed. “I think we need to give these facilities coming online a chance to get up and running and then to see if Iowa is saturate, the market is. So I would concur with your remarks,” Arnold says. The new casino is under construction in Greene County, a new land-based casino opens in Sioux City tomorrow (Friday) and the Davenport casino is moving to a location along I-80 from the river.

Commissioner Delores Mertz of Algona was the only member to vote for the Cedar Rapids license. “We need to keep an open mind on all of this, because circumstances change, environment changes, the economy changes. So,I wouldn’t want to say outright no to anyone,” Mertz says. “I think they have that right and that’s their privilege to do what their community, their environment entices them to do.” But Mertz says she agrees they should not issue any new licenses until the new facilities are up and running.

Commissioner Kristine Kramer of New Hampton says competition from other states and the economy are factors to consider. “Think we just need to sit back awhile and see how things go,” Kramer says. “You look across the country and you do see other casinos closing. And with Nebraska (considering gambling) and everything, I think we just need to sit and wait and see how the market is going. We don’t know what the future will bring, so we just have to wait and see.”

Commissioner Carl Heinrich of Council Bluffs says the market studies that show saturation lead him to the same conclusion. “I think my main concern has always been through this process is the effect it has on existing operations,” Heinrich says. He says it appears any new operation at this point is going to affect other casinos in the state.

Commission Chair Lamberti says a move by the legislature to change the current law would impact the situation. But, Lamberti says the commission now has to consider the impact on existing casinos before approving any new gambling licenses. “That’s how we interpret the law, that’s how we have implemented the law throughout the years, and if there is going to be a change, it needs to come from the legislature,” Lamberti says. “And as we look at the market studies, the impact there was so significant. I mean, that’s the basic problem.”

The commissioners discussed the issue at their monthly meeting today in Johnston.