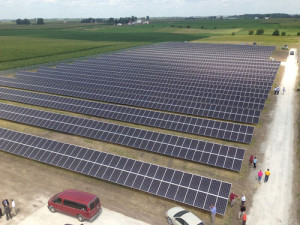 The state’s largest solar farm is located south of Iowa City and north of Kalona.

State, local and national officials celebrated the opening of Iowa’s largest solar farm today. The farm is located in eastern Iowa about 11 miles south of Iowa City and six miles north of Kalona.

Farmers Electric Cooperative built the facility and general manager Warren McKenna says it will produce 800 kilowatts. “With 2,900 solar modules on four-and-a-half acres. It’ll generate enough for about 123 homes annually, and over a million kilowatt hours a year.

McKenna says they partnered with an eastern Iowa company to build the farm.”This project is financed through a PPA, a purchase point power agreement, with Eagle Point Solar out of Dubuque. And it will have a 10-year ownership for the Co-op. After 10 years of purchasing the power, we will then assume ownership of the project,” McKenna explains.

Information from the company says it will give the co-op the highest per-capita solar generation of any utility in the country. “It’ll generate even on cloudy days — of course that’s going to impact production — overall the average is four-point-seven hours a day times 365 days a year,” McKenna says. “It’ll output about 80 percent of the rated capacity. Sometimes more, sometimes less.”

McKenna says the solar farm adds another dimension to the renewable energy the co-op produces. He says solar power has some different requirements from wind power.

“It does take up some acreage, it’s a little larger footprint than wind. But, we don’t have to climb a tower to do maintenance, it’s all right there at eye level,” McKenna says. He says the cost of solar power has become more afforable than it was in the past. “They’re squeezing more power out of the same size module and the price has dropped probably about 50 percent over the last five years,” McKenna explains.

McKenna says they have four more acres of land available if they want to expand the solar farm in the future. The Frytown-based co-op has around 650 members.