You are here: Home / News / Drought conditions continue to ease in Iowa 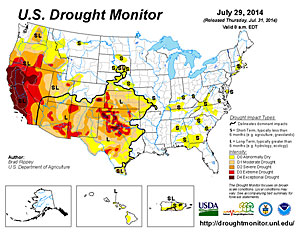 After a rainy June and a cool July, Iowa’s starting August almost entirely drought-free. A new report from the National Drought Mitigation Center finds only parts of three counties in far southwest Iowa are still in the very lowest level of drought.

Center climatologist Brian Fuchs says all of those heavy downpours in June were a big benefit to Iowa, though they came at a cost. “Not only did we get the rain across the state but associated with that was the severe weather with a lot of wind, a lot of hail, even some tornadoes,” Fuchs says. “The recovery was influenced by these storms which also brought another form of destruction. Yeah, we put a dent in the drought but we had some suffering in other areas as well.”

Governor Branstad is asking President Obama to declare 22 more Iowa counties federal disaster areas from damage sustained in storms from June 26th through July 7th. Thirty-five counties statewide have already been designated federal disaster areas for earlier storms, flooding and tornadoes. While 96 of Iowa’s 99 counties are now drought-free, the latest national picture shows drought is still very much a problem for wide sections of the country.

Fuchs says, “There has been some improvement but much of that improvement has been in the Midwest and Central Plains, the area from Nebraska and Kansas and Iowa and Missouri and Illinois where we have had the abundance of moisture but in that same period, we have seen that drought developing and expanding out in the western U.S.”

Drought still plagues a large portion of the country, especially the southwestern and western United States, from California and Nevada to Texas and Oklahoma. Fuchs says, “A little over a third of the country still is seeing some drought and a little over 10% of the country is seeing extreme drought right now.” The latest survey shows parts of three southwest Iowa counties are “abnormally dry,” the lowest category on the drought monitor: Pottawattamie, Mills and Fremont.