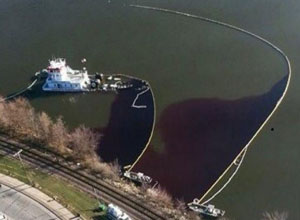 The Stephen L. Colby, after the sinking, with oil boom deployed.

Federal investigators say crew members are likely to blame for the sinking of a towboat near LeClaire, Iowa late last year.

The National Transportation Safety Board has released a report which states the probable cause of the sinking of the Stephen L. Colby towboat was the failure of the vessel’s master and mate to ensure there was enough clearance between the boat’s hull and the riverbed.

The accident happened on November 25. The towboat partially sank into the river after hitting an underwater rock. The nine crew members on board made it to the riverbank. No one was injured.

Some of the diesel fuel and oil aboard the vessel spilled in the river and crews spent the next few weeks, in bitterly cold conditions, collecting nearly 40,000 gallons of oily water.