You are here: Home / Sports / Iowa tackle Scherff looking for line to impose will on opponents 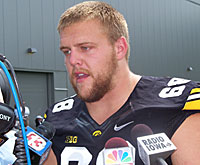 Offensive linemen often get overlooked in football with the focus the quarterback, runningbacks and receivers. But University of Iowa senior Brandon Scherff of Denison is getting a lot of notice after deciding not to leave early for the NFL. A lot of the attention came from a weightroom video that went viral showing him doing what’s called the “hang clean” of 443 pounds three times in a row.

The left tackle says it was just something that happened while working with strength coach Chris Doyle. Scherff says Doyle asked him what he wanted to do that day and he says he wanted to do something different after lifting 437 pounds two times. “I was just trying to get one, and three popped out. I was happy with it, all those teammates pushing me was a great environment and it’s a memory I will never forget,” Scherff says.

Scherff didn’t know that Doyle posted the video until he started hearing about it. “Everbody just texted me, I didn’t know what they were talking about. We were fishing and everybody texted me and I was ‘aw jeeze, so,” Scherff explains. 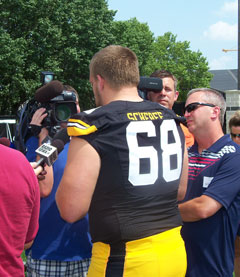 Tackle Brandon Scherff’s size and strength is already getting noticed.

Scherff is 6-5 and 320 pounds, and while he is soft spoken off the field, he tries to send a message during the game. “We want to be know as the most physical unit on the field, that’s what we are trying to play for,” Scherff says. “Attack, compete, finish that’s our motto and we are just trying to impose our will on other people. We just want to get the last hit in.”

Scherff says the enter fall camp looking to end up on top of the conference. “Our goal is to win the Big 10 Championship game and to get into that four-team playoff. That’s everybody’s goal and the team that comes the most ready and they do the little details right, they are going to win the game,” Scherf says.