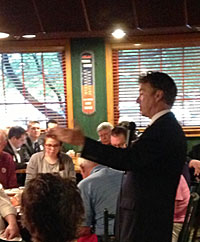 Kentucky Senator Rand Paul hinted to a group of Iowa conservatives today that his wardrobe is ready for campaigning in the states that will hold the lead-off events in the 2016 presidential campaign.

Paul is wrapping up a three-day tour of the state which took him from Council Bluffs and Davenport, with nine stops in between.

“We came by car, so we’ve done a lot of driving,” Paul said of his 800-mile trek through Iowa. “We’ve seen a lot of corn and we saw that a lot of the corn was parched, so I think a lot of the corn is going to like a nice drink of water this morning.”

Senator Paul started Wednesday with a 20-minute speech to the Westside Conservative Club in Urbandale, ending with a call for a “more diverse” Republican Party.

“We need to be a more welcoming party,” Paul said. “…We have to have the right policy on immigration, but we can’t be the party that appears not to like people because they’re immigrants. Everybody in here was an immigrant a hundred years ago, probably — you’re parents, great-grandparents were.”

Paul has said the GOP would benefit if congress is able to pass some form of immigration reform before the next presidential election. Paul considers securing the southern border to be job one, however, before any changes in the immigration system can be considered.

“But we can’t be the party of hostility towards people who don’t necessarily look like us, who have a different background. We need to welcome people to our country and be a welcoming party,” Paul said. “It has to be done lawfully. The policy’s important, but so is the attitude.”

Paul answered questions from the audience for nearly half an hour. The senator, who has said he’ll make a final decision about a White House run early in 2015, also appeared at an Iowa Republican Party “victory office” in Urbandale this morning to speak with volunteers and a large group of foreign visitors.