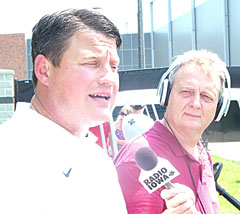 Brian Ferentz talks about his offensive line at media day.

Iowa’s offensive line returns four of five starters from last season’s 8-5 bowl team, but line coach Brian Ferentz says that doesn’t mean all but one spot is locked up as they open fall practice.

“There’s spots that are open, things can move, nothing is set in stone. Every position is open,” Ferentz says. He says he doesn’t expect senior left tackle Brandon Scherf or junior center Austin Blythe to be displaced and he says there are others he also doesn’t expect to lose their starting spots.

“What’s important for us over the next 25 days or so is to really nail down who is going to be playing for us. And it may be more than five guys, it may only be five guys, but I know we’d better find at least five.”

Ferentz says filling out the offensive line is much easier with Blythe back at the center spot. “Anytime you have to break in a new center, it’s like breaking in a new quarterback, that’s no fun. When you have to break in a new quarterback and a new center, that’s a little bit difficult and certainly we had to do that last year — which wasn’t always fun,” Ferentz says. “The benefit is — because we did that last year — we should be looking at two more seasons of continuity there.”

He says the center is key because of the philosophy they have for the offense. “I think you’ve got to start with the idea that all of our centers have to be intelligent guys. We put a little bit more on their plate than we do on any of the other positions,” according to Ferentz. “We kid around and say you only have to count to two to play on the offensive line here. And to some extent that is true.” Ferentz says the other lineman only have to count to two because the center points out all the offensive calls and passes them on.

There’s another reason the center position is so important. “If it was just a matter of intelligence, we’ve had a lot of guys who could probably play center. The second thing is, we are always going to ask that guy to be the bell cow for our offensive line,” Ferentz explains. He says the center has to lead the others no only by pointing out assignments, but by effort and poise as well. Ferentz says Blythe has grown into that role in the last two years. Iowa opens the season on August 30th at home against Northern Iowa.