You are here: Home / Crime / Courts / Burlington man charged with murder in shooting of bicyclist 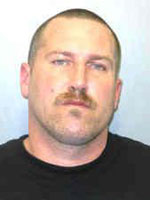 A Burlington man is being held in the county jail in the shooting death of another man on a city street Wednesday.

Bond has been set at $250,000 cash for 38-year old Josh Royer, the Burlington man accused of shooting & killing 50-year old Eddie Martin of Burlington yesterday afternoon at the intersection of Aetna and South Gunnison.

Martin was riding a bicycle when he was shot. He was taken to Great River Medical Center, then flown to Iowa City, where he died. Neighbors and others reporting seeing a car leave the scene and police found the car and then Royer. Royer has been charged with first-degree murder.