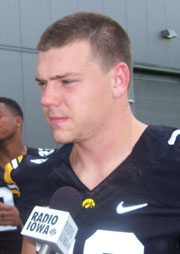 Junior Travis Perry of Urbandale is one of the players the Iowa Hawkeyes are looking to step in and replace three senior linebackers from last season. Perry orginally walked on at Iowa and says this is the time he has been waiting for.

“It’s everyone’s dream to come here and start, I mean that’s why you play football that’s why you compete, is to be the starter,” Perry says. “We’ve got a long ways to go, it’s just the beginning of fall camp, but we are looking forward to the challenge as a linebacker corps, as a defensive unit of continuing to push each other each and every day and to get better one day at a time.”

Perry has battled some injuries, but says he is ready to go with the start of practice. “I fell good, I was a little ill in the spring, but I am back to my normal weight and my healthy self. I feel good,” Perry says.

He says there’s a key to being ready to play the position. “Preparation, preparation makes great players and that’s a huge part of today’s game because you can only do so much on the field. You body only allows you to do so much in a two to three hour practice, and then the rest of the time is spent in the film room,” according to Perry. “The more time we can get as a linebacking corps in the film room, the better off we are going to be, because people will see different things and we’ll be able to communicate that to each other.”

Perry says the defensive line is also a key to the success of the linebackers.”Those guys they do all the dirty work so the linebackers can come off free. And we’ve got a lot of experience there and a lot of leadership, so that’s a big help,” Perry explains.

The Hawkeyes got back on the winning track last season and went to a bowl game. Perry says that doesn’t have any impact now as they prepare for a new season. “We look at it the same, it doesn’t really matter who is on your schedule or what you did the last year or the year before, you’ve got to come out here and be ready to play. Because every team is coming ready to play, that’s college football. If you are not executing in all three phases of the game of football, you are going to come out unsuccessful. It really doesn’t matter who we line up against, we’ve got to be ready to go,” Perry says.

Perry is listed as one starter at linebacker in the fall depth chart along with Quinton Alston and Reggie Spearman at the other two spots. Iowa opens the season hosting Northern Iowa on August 30th.