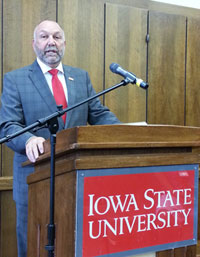 Iowa State University President Steven Leath has announced the end of Veishea, a 92-year-old tradition on the Ames campus.

The spring celebration was marred by violence again this year. A task force, following several public meetings, recommended to Leath that Veishea be retired.

Leath made the announcement at a news conference in Ames.