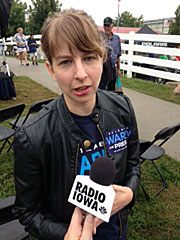 A woman who worked on President Obama’s 2012 campaign is at the Iowa State Fair, passing out “Warren for President” bumper stickers. Erica Sagrans is working with a new group that’s touting Massachusetts Senator Elizabeth Warren as a 2016 presidential candidate.

“We came to the state fair to just get started in Iowa,” she said, “and we want to show that, you know, people in Iowa support the idea of Warren running, also just talk to people in Iowa and see what they’re thinking and what they want to see in a 2016 candidate.”

Warren was elected to the United States Senate in 2013 after serving as the head of the newly-created U.S. Consumer Financial Protection Bureau. Warren has said she’s not going to run for president, but Sagrans disregards that.

“Obama said he was not running before he ran and Hillary Clinton said she’s not running again after she ran the first time,” Sagrans said, “so like any candidate (Warren) can’t say she’s running until she’s actually decided and it’s a obviously a big decision, so we think she’s listening and we want to show her support while she’s making that decision.”

Sagrans is carrying a clipboard and asking Iowa fair-goers to sign a petition urging Warren to run. Twenty-seven-year-old Matt Ross of Martensdale signed it.

“Mainly because she has the consumers’ best interest at heart and she grew up in a family that wasn’t exactly wealthy or anything,” said Ross, who works at a group home and is going to college. “And she seems to actually genuinely care about people, as opposed to pandering.”

Polls suggests Hillary Clinton would easily win the Democratic Party’s next presidential nomination if she enters the race and there’s a coalition of Clinton supporters running a well-funded “Ready 4 Hillary” campaign. But Sagrans, who has worked as an online strategist for Democrats, is nonetheless touting Warren as someone who can be “the spine” of the Democratic Party.

“She’s not afraid to be a strong progressive,” Sagrans said.

Senator Warren has written a book and has made book tour appearances around the country which have attracted large crowds, but she has no stops scheduled in either Iowa or New Hampshire, the two states that hold the opening contests in the presidential campaign.