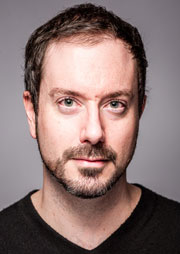 “‘Ride Around Shining’ is about a man who tells a couple of seemingly-innocuous lies to get a job working as a chauffer for a fictional Portland Trailblazer,” Leslie-Hynan says. “Then, he gets rather caught up in this man’s lifestyle and seeks to make himself necessary to the man’s life.” Leslie-Hynan, who is white, has lived in Portland, Oregon, for several years and closely follows the NBA team, but says he didn’t need a press pass to create the work of fiction.

“A guy asked me, ‘How close did you get to the team? Were you in the locker room or hanging around the sidelines?’ and I don’t think that’s really necessary now,” Leslie-Hynan says. “There’s so much that’s available on the internet that gives you a little bit of a peek behind the curtain. A lot of the work is imaginative but beyond that, you just have to open up your browser and start looking for things.”

Since he finished grad school in 2008, Leslie-Hynan says he’s supplemented his income playing poker. Those card players on TV are much better, he says, but many others lack fundamental skills, like patience. He says he has the patience to “wait for the good cards” and he once won $6,000 in a day. “Yeah, well, you can also lose that in a day, you know,” he says, laughing. “Much of the game is building up a certain amount of pain tolerance for the losses that are inevitable, even if you are a longterm winner.”

Fittingly, he says his next book will be about gambling. Leslie-Hynan is scheduled to do a reading at Prairie Lights book store in Iowa City on September 3rd.