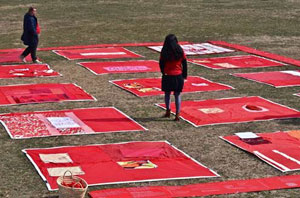 Homemade quilts offer warmth and comfort but a special, oversized quilt that will be brought to central Iowa next week aims to offer a different type of solace to survivors of abuse and rape. Rebecca Nagle is co-director of Force, the group behind the project.

Nagle says the Monument Quilt is in some 200 sections on bright, red squares. “The quilt is an ongoing collection of stories from survivors of rape and abuse and by stitching our stories together, we are creating and demanding public space to heal,” Nagle says. “It’s an effort to change culture in the United States from a culture where survivors are publicly shamed to a culture where survivors are publicly supported.”

The Monument Quilt is being displayed at public parks, town squares, college campuses and high school football fields — and it’s an enormous tapestry. “Right now, it’s 100 feet by 100 feet, roughly the size of two basketball courts put together,” Nagle says. “It’s going to continue to grow and a final installation will be installed on the National Mall.”

This summer’s 12-city tour of the United States has a goal of creating a national conversation about supporting survivors of rape and abuse. The quilt is making one stop in Iowa — in Des Moines next Thursday. “It’ll be displayed at Western Gateway Park,” Nagle says. “The quilts are sewn into larger blocks with pathways in between so people can come and walk between the different quilt squares, read the stories. We’ll also have places where people can write their own reflections and add to their own stories and add to the quilt.”

It will be on display in Des Moines from 3 to 8 P.M. on August 14th. She says the Monument Quilt’s stop in Iowa is designed to create spaces to break the silence, heal and prevent sexual violence. Studies find one in three women and one in six men will be raped or abused in their lifetime, while women are twice as likely to experience rape as they are breast cancer.