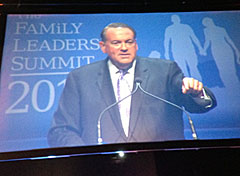 Five Republicans who may run for president in 2016 addressed a crowd of Christian conservatives in Ames today, with the event’s final speaker delivering a scorching indictment of President Obama’s foreign policy.

“With all of our friends, they no longer trust us and our enemies no longer respect us and they certainly don’t fear us,” former Arkansas Governor Mike Huckabee said, “and today the world is a more dangerous place because of it.”

Huckabee, the victor of the 2008 Iowa Caucuses. Huckabee accused President Obama of doing too little, too late to help the Kurds in northern Iraq.

“They stand there tonight battling with little more than the hopes that America will once again be a nation that values people who love freedom and love God,” Huckabee said. “And why aren’t we there?”

None of the other could-be candidates addressed the developing situation in Iraq during their remarks at the third-annual Family Leadership Summit. Former Pennsylvania Senator Rick Santorum, the winner of the 2012 Iowa Caucuses, told the crowd he’ll depart August 17th for a trip to Israel.

“And I’m heading to Israel because I’m embarrassed for my government,” Santorum said, and the crowd applauded. “I want to show the people of Israel that there are people around this country who stand in solidarity with them…even though the Obama, Clinton Kerry regime over the past five years and that is fighting for its life.”

Texas Senator Cruz criticized the Federal Aviation Administration for its now-retracted advisory that U.S. airlines should halt flights into Israel.

“All of us, our hearts are breaking at what’s happening in Israel,” Cruz said. “As rockets rain down on the nation of Israel as we’ve discovered a network of terror tunnels coming in, dug by Hamas terrorists and coming up in kindergartens for terrorists to kidnap and murder young children.”

After the summit, Cruz told reporters Iraq is “the latest manifestation of the failures” of the foreign policy vision of President Obama and former Secretary of State Hillary Clinton.

“The appropriate response is for the president of the United States to delineate a clearly-stated military objective that hinges off of U.S. national security interests. The president has not endeavored to do that,” Cruz said. “And indeed, if military action is still ongoing, the president needs to come to congress and seek authorization from congress for military action.”

Louisiana Governor Bobby Jindal briefly mentioned the “shooting war overseas,” but he focused mainly on domestic issues and the situation along the U.S./Mexican border.

“I’ve got a very simple message for the president of the United States. We don’t need a comprehensive bill. We don’t need another thousand page bill. He simply needs to man up. He needs to secure the border and he needs to get it done today,” Jindal said. “There are no more excuses. No more delays.”

Texas Governor Rick Perry drew applause from the crowd for mentioning his recent decision to send Texas National Guard troops to the border. Perry also called the president’s foreign policy a “muddled mess.” Each of these five men spoke of their Christian faith and, as Perry did, encouraged the crowd to stand firm in their Christian beliefs.

“You have the power to save America and to make America strong again,” Perry said.

Rafael Cruz, a pastor who is the father of Texas Senator Ted Cruz, also spoke at today’s event, telling the crowd it is time to elect “righteous leaders” rather than “the village idiot.”

Organizers of today’s summit announced Saturday, August 15, 2015 as the date for next year’s Family Leadership Summit. That would be the same day as the Iowa Republican Party’s Straw Poll, if the party chooses to hold one.