You are here: Home / Sports / Leader of IHSAA to retire in January 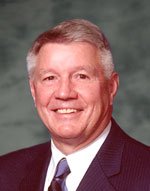 Rick Wulkow is retiring as the Executive Director of the Iowa High School Athletic Association. Wulkow has spent the last 35 years at the IHSAA, including the last 10 as the director. “I just feel it’s time to start a new chapter in my life,” Wulkow says. He says after all the nights as a coach, official and with the organization, it’s time to support some of the things his wife and children do after they have supported him.

Wulkow’s will step down in January and says it is a move he has been considering for about a year. “I still get up every morning, I still enjoy my job…I’m not worn out, I just think it’s time to start a new chapter in life,”Wulkow says.

During Wulkow’s time at the helm the association has expanded district football as well as the football playoffs and the state instituted a “no pass no play” rule.

Wulkow says while the IHSAA is most visible during championship events the biggest goal remains promoting participation so students can gain some values from being part of a of a team. “Teamwork, hard work, dedication, loyalty, learning how to win, how to lose, there’s just some great values out there that the activities offer that our students don’t get in the classroom,” Wulkow says.

Alan Beste will take over as Executive Director. He has been with the IHSAA since 1989.