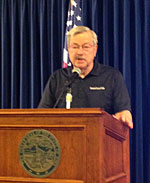 Governor Terry Branstad says it’s unlikely any laws will be changed as a result of the recent incident involving a “sexual predator” who walked away from a northwest Iowa treatment facility.

“This is a delicate area and it’s one the courts have really kind of spelled out what is possible,” Branstad says.

In 2011 a court ruled 42-year-old Cory West was violent and likely to commit another sex crime, so West was sent to the Cherokee Mental Health Institute after his prison sentence expired, then last fall West became eligible for a transition program. He did not return from work early Sunday, August 3. West was captured four days later in Oklahoma.

“I’m glad we have a law that permits us to hold these people that are dangerous and should not be released, but we also have to obviously make sure it’s done in the appropriate way,” Branstad says. “This would be an example of where the court should look at this and determine if this individual should be held longer in light of what just happened.”

West has had several convictions for sexual abuse. His latest was in 2008, when he pled guilty to assault with intent to commit sexual abuse. West was found in a Tulsa hotel last Thursday.