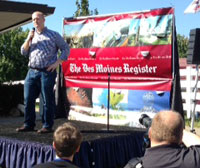 King has been an outspoken critic of the president’s immigration policy, but Mowrer did not mention that issue in his five-minute speech. Instead, Mowrer talked about raising the minimum wage — which he would vote to do — and preserving the “safety net” for America’s seniors.

“And that’s why there’s going to be such a great contrast in this race between my opponent and I because I want to strengthen and protect Social Security,” Mowrer said. “He has said that he wants to raise the retirement age to 75. He’s voted to raise the retirement age to 70 and he’s said that people should be working until 75 Walmart will hire people up until the age of 74. That’s not the right vision for the future of America.”

Mowrer did not mention King by name during his speech, which was delivered on The Des Moines Register’s “Soapbox” on the Iowa State Fairgrounds.