You are here: Home / News / Charges of ‘crazy’ and ‘stale’ fly at debate between Branstad, Hatch 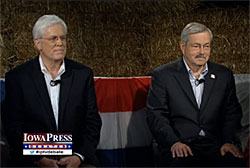 The two major party candidates for governor met in their first, face-to-face debate of the campaign Thursday.

Republican Governor Terry Branstad and Democratic challenger Jack Hatch quarreled over the past and traded jabs over their proposals for the future. Hatch repeatedly used this theme: “We need better leadership and a fresh start.”

It was his way of emphasizing Branstad’s 20 year career as governor.

Branstad described himself as a life-long Iowan who grew up on a farm and suggested Hatch, who is a state senator from Des Moines, can’t relate to rural Iowans.

“Somebody who has never really represented the whole state of Iowa, just represents a safe Democratic district here in the largest city of the state,” Branstad said.

Hatch responded: “I may be from Des Moines, but I’ve lived in Iowa my whole adult life and this state is important to me.”

The candidates spent several minutes of the debate focused on the previous governor, Democrat Chet Culver. Hatch defended Culver’s decision to borrow to build infrastructure and recover from the floods of 2008. Branstad was on the edge of his chair, waiting with this response:”Last time I ran against ‘big debt Chet’ and now (Hatch is) supporting the big debt that we ended up with…I can tell you, most of the people of Iowa didn’t like the state of Iowa going into debt.”

Branstad said the state is now dealing with natural disasters, without borrowing to finance recovery efforts. The debate’s moderator tried to move on to another topic, but Hatch interjected, suggesting the eastern Iowa cities hit by flooding six years ago would still be struggling if the borrowed state money hadn’t been there.

The two quarreled over the state package of incentives for the Egyptian company that’s building a fertilizer plant in southeast Iowa. Hatch said the company got too much.

“In all, public taxpayers paid $3.2 million per job for that,” Hatch said.

And Branstad said Iowa farmers will benefit from the plant’s cheaper fertilizer.

On the subject of gambling and the Racing and Gaming Commission’s decision to deny a casino license to Cedar Rapids, Branstad said regulators should follow the law and “determine what’s in the best interests of the state of Iowa.” Hatch said state regulators shouldn’t deny Cedar Rapids a casino because it might take business away from casinos in Waterloo and Riverside. Hatch said the market should decide winners and losers.

As the debate opened, Branstad said he had “only just begun” and promised to serve all four years if he’s elected to a sixth term as governor. Hatch repeatedly criticized Branstad’s management style and brought up allegations that the governor is changing job classifications so Branstad can threaten immediate termination if administrative law judges don’t decide cases as the governor wants.

“I think people feel that the governor’s been there too long, that he’s not in charge of his administration, that he didn’t know about all these scandals that are coming out,” Hatch said.

“All these wild accusations he makes. Iowans know better. I go to every county, every year,” Branstad said. “They know that they’re not true.”

Branstad also used the debate to unveil what he called his “Connect Every Acre” proposal, new state incentives to businesses to expand broadband service in rural areas.

“Because it is so important to agriculture and right now we have a gulf of what happens in our cities,” Branstad said. “They have high speed internet. Many of the rural areas don’t.”

Hatch said Branstad’s “Connect Every Iowan” incentive plan failed to make it through the legislature this past year because “special interests” killed it and Hatch said it may be time to regulate broadband like a utility.

“If the big guys try to stop the little guys from getting broadband across the state, then we’ll take a look at what we have to do to regulate the industry,” Hatch said.

The debate was sponsored and broadcast statewide by Iowa Public Television and it was staged inside a livestock sale ring on the state fairgrounds. Over 300 spectators were in the stands, watching. At the end, both candidates were asked to name a state fair competition they might be able to enter and win. Hatch went first.

“I’d like to think it’s the pie eating contest,” Hatch said, getting laughter from the audience.

Branstad noted he has already won the Governor’s Charity Steer Show at the state fair three times, then debate moderator Dean Borg asked Branstad:”He said he’d like to eat a pie. Would you bake it?”

Branstad and Hatch laughed, then Branstad responded: “My grandmother used to make the best apple pies. He probably wouldn’t eat it if I made it.”

After the debate, Hatch told reporters he wouldn’t rule out eating a Brantad-made pie, but needed to know: “What kind?”