You are here: Home / Fires/Accidents/Disasters / Lifesaving awards presented at the Iowa State Fair 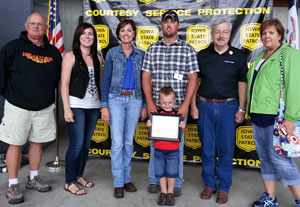 Seth Thompson with the Governor, Lt. Governor and his family.

Six Iowans were honored at the Iowa State Fair today for actions they took that likely saved the lives of other citizens. Seth Thompson of Treynor was presented with a Governor’s Lifesaving Award for his bravery on the morning of December 14, 2009.

The wind chill was five-below-zero and roads were icy at the time Thompson and a co-worker were driving near Storm Lake on their way to Okoboji for a construction job. The truck in front of them spun around, rolled twice off the road, and landed upside down in a frozen creek.

Thompson and his co-worker, Nolan Strobehn, stopped, ran through the snow, and jumped a fence to reach the truck. “We both jumped down on our stomachs and started feeling around in the water. We just barely felt a hand or an arm or something, grabbed a hold of that and pulled the guy out,” Thompson said. “As we were all standing there, in disbelief of what just happened, the guy slowly muttered out as he was freezing, ‘there’s another guy.'”

Thompson reached back in the submerged pickup and pulled the driver out as well. Thompson said both men in the pickup, Jesus Alvarado and Joshua Allsup, would have likely drowned had they not been followed on the highway. “If we were not behind them, there was nobody else on the highway…the truck was not visible from the highway, so there would have been cars passing all day,” Thompson said.

The two men in the pickup suffered only minor injuries and were treated at a hospital for symptoms of hypothermia. Thompson credits his six years of service in the Coast Guard for his quick response to the accident. “I was used to crazy, gruesome stuff happening, so it was just respond, do what you need to do to help out, and that was it,” Thompson said.

While Thompson has not kept in close contact with the men he helped rescue over five years ago, he did hear that one of the men, inspired by the incident, became a volunteer firefighter. Paula Lash of Runnells was also recognized for her response to a serious car accident that occurred on May 21, 2013. Her actions helped minimize the injuries suffered by a passenger, Molly Urfer. “It’s very special to be recognized, although I think it’s something that everyone should do. I just did what I thought was right and I’m thankful that Molly is healing up. That is very gratifying,” Lash said.

Molly’s husband, Jim, was also in the car. He died of his injuries. Molly Urfer attended today’s (Friday’s) ceremony and said she’s grateful for Lash’s quick action. “By putting her hands through window and holding my neck still, and she said, ‘I will stay with you Molly until the ambulance comes.’ And with a brake in my second vertebra of my neck, if I had moved or jostled around, it could have been a lot different story,” Urfer said.

Lash said she noticed people had stopped at the site of the car crash, but no one was checking on the vehicle’s occupants. “I actually had a friend of mine who stopped at an accident scene after this because they heard about me stopping and I think that is one of the best things that came out of this,” Lash said. The other Iowans honored at the ceremony are residents of Ireton, Tiffin, Coralville, and Webster City.

Here is more from the Iowa Department of Public Safety on the other award winners:

On December 6th, 2013 at approximately 3:27 in the afternoon, Tara Dekkers was driving with her daycare children to a local book fair. After driving approximately 1 mile, Tara heard a noise come from the rear of the van and the children began to complain of an odor. Tara looked in the rearview mirror and saw smoke in the rear passenger compartment. She pulled the van safely onto the side of the roadway and observed that the smoke had now spread to the driver area as well. Tara went to the back of the vehicle to open the rear door and saw flames underneath the vehicle near the rear axle. As the fire grew closer to the fuel tank Tara worked quickly to have the children unbuckle their seatbelts and evacuate to a nearby ditch. The temperature was just 5 degrees that day with a wind chill of 14 below, thankfully a passerby noticed their situation and stopped to assist. Tara began removing the younger children from their safety seats and handed them to the passerby who then placed them in a nearby vehicle to keep them warm. Once all children were evacuated they backed the passerby’s vehicle away from the burning van and waited for fire and rescue. They watched as the van became totally engulfed in flames. Thanks to Tara’s bravery everyone escaped unharmed.

On December 31st, 2013 at approximately 5:00 p.m. Shonda Eister (I-stir) and her father Lawrence had been working in their yard doing chores. After coming into their home Lawrence’s clothing caught on the basement railing. After attempting to remove the clothing from the railing Lawrence slipped and fell to the bottom of the stairs where he became unresponsive. Shonda immediately assessed the situation and called 9-1-1. Upon receiving the call the dispatcher gave Shonda instructions on how to perform CPR. Shonda immediately started and continued CPR until help arrived on scene. Thanks to Shonda’s immediate actions her father received lifesaving treatment.

On May 21st, 2013 Paula Lash was driving home from work and came upon a car crash. Paula noticed that other cars were not stopping to see if anyone needed assistance therefore Ms. Lash stopped to render aid. She checked on the occupants of both vehicles and while checking the second vehicle she could tell both occupants were in significant pain. Paula spoke with the couple and observed that the woman, Molly Urfer, appeared restless and kept reaching for her neck. Fearing that Molly had seriously injured her neck, Paula immediately stabilized her neck and tried to reassure her to help keep her calm. Paula continued to speak with both Molly and her husband, Jim, until paramedics arrived. The couple were immediately taken to the hospital where Molly’s husband, Jim, tragically succumbed to his injuries. It was also determined that Molly Urfer had broken her second vertebra in the crash and required weeks of recovery. Thanks to Paula’s immediate response and intuition to stabilize Molly’s neck, Molly’s injuries were minimalized.

On December 10th, 2013 Sandra Morrow was working at her place of employment in Iowa City that day and went into the office break room where she noticed that coworker, McKenzie Paulsen, was choking on something that she was eating for lunch. Sandra immediately checked with McKenzie and verified that she was in dire need of assistance from something lodged in her throat. Other employees in the lunch room ran to dial 9-1-1 to try to get assistance. Immediately after assessing the situation Sandra began performing a technique known as the Heimlich maneuver and was able to dislodge the object from Ms. Paulsen’s throat. With Sandra Morrow’s quick observation and action she helped a fellow employee.

On December 14th, 2009 Seth Thompson was headed to work in Okoboji. It was a very cold day with a wind chill of 5 below zero, the roads were icy and the winds were making navigating the roads a challenge. During his drive Seth noticed a truck with two occupants in front of him begin to lose control on a patch of ice and then watched it roll into a creek and break through the ice coming to a stop. When it finally came to rest, it was on its top. Seth quickly stopped his vehicle and he and his passenger ran down to the truck. Seth observed that the windows in the truck had broken on impact and the cab was quickly filling with water. When he arrived at the truck, which was near the creek bank, Seth was able to reach in the passenger window by laying down on the edge of the bank, his stomach and chest were submerged in the icy water as he felt for the passenger’s arm. Seth grabbed the arm and pulled the disoriented passenger from the truck and onto the bank. Knowing that the driver was still inside he again reached through the passenger window and just barely reached his outstretched hand. Seth grabbed the hand and pulled the second person onto the creek bank. Both the driver and passenger of the truck, Jesus Alvarado and Joshua Allsup, were taken to the hospital and treated for their injuries and symptoms of hypothermia.

On March 3rd, 2014 at approximately 4:30 p.m. Tom Boeding (Bay-Ding) and Wayne Judkins were playing racquetball at a recreation center in Webster City, during this exercise session Tom unexpectedly collapsed. Wayne Judkins immediately ran to the front desk of the recreation center to get help and advised employees to call 9-1-1, he then quickly ran back to help Tom by administering CPR. In a short period of time with the help of an employee an Automated External Defibrillator was used to deliver lifesaving treatment to Mr. Boeding. After the shock was delivered Tom began breathing again. He was transported to the hospital where he underwent bypass surgery.