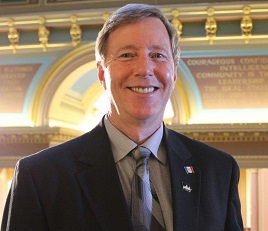 A northwest Iowa man who’s featured in a “puzzling” documentary will be in Iowa City this Saturday to answer questions about the film and his hobby. John Wittneben of Estherville began putting jigsaw puzzles together when he was about six years old.

“I’m guessing it had a lot to do with my father being a nightwatchman and four nights a week he didn’t get up ’til 5 or 5:30 and when we came home from school or in the summer or whatever, we had to be quiet in the house,” Wittneben says. “So, especially in the winter, you could go down and put a puzzle together.”

Wittneben, who is now 59 years old, attended the American Game and Puzzlers Convention in Massachusetts a decade ago where he met a man from Minnesota who encouraged him to become a competitive puzzler.

“It took him about four or five years to convince me I should be on the team because I do it for relaxation,” Wittneben says. “I like to put them together at home, in the winter. I’ll listen to the radio or listen to a movie and assemble a puzzlie and here’s a guy wanting me to do it for speed and, I don’t know, I did it once and the bug took.”

Wittneben joined a team of three other people from the Twin Cities area in 2010. The team has won the St. Paul Winter Carnival’s puzzle competition every year they’ve entered.

“It’s the last Saturday in January every year and there’s about 300 competitors there, in teams of four, and I got on a team five years ago and we’ve won every year, which is kind of nice and so people keep asking us: ‘Well, what’s your secret?’ and I don’t know,” Wittneben says. “We all like doing puzzles and I’ve probably put 4000 or 5000 of them together, so maybe experience counts.”

Wittneben boils down his team’s strategy to “divide and conquer” with one person putting together the border while Wittneben and the other two sort the interior pieces. Their fastest time assembling a 500-piece puzzle in competition is 43 minutes.

“We have a pretty good rule: nothing goes on the table but the (puzzle) pieces. You’ll see some teams might bring snacks or a bottle of water and they’ll talk a lot,” Wittneben says. “I get so focused on what I’m doing, sometimes I almost forget I have teammates.”

Wittneben’s featured in a documentary about his team and the St. Paul Winter Carnival, which hosts the only remaining puzzle assembling competition in the country. Wittneben hopes the film spurs interest in the hobby.

“When we were kids, you could go into the hobby store and there would be rows and rows and shelves and shelves of puzzles, but now they’re getting hard to find,” Wittneben says. “…I like to think maybe this documentary will help. I mean, it’s funny to watch. It’s 52 minutes long and it just shows some good natured people having some fun.”

The film is titled “Wicker Kittens” and it will be shown Saturday afternoon in Iowa City at the Landlocked Film Festival. The film’s producer, along with Wittneben and another competitive puzzler from Minnesota will answer questions from the audience after the documentary is shown.

Wittneben, who is a licensed land surveyor, often jokes that he wishes tracts of land fit together as neatly as a jigsaw puzzle.