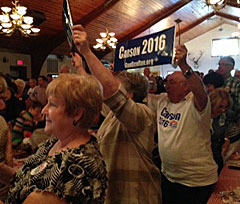 Crowd at the Carson appearance.

A retired neurosurgeon who is the author of a book that’s on the New York Times best-seller list spoke to over 400 Republicans in Iowa’s capital city tonight. Supporters in the crowd wore t-shirts and waved signs encouraging Ben Carson to run for president in 2016.

“It’s been a little while since we’ve been to Iowa, a wonderful, wonderful place — particularly if you like corn,” Carson said to start his remarks, then Carson and the crowd laughed.

Carson said this is no time for Republicans to relax because of the stakes in this fall’s election.

“I’m not sure if we don’t take the Senate in November that there’ll even be an election in 2016 at the rate that we’re going because we will still have Harry Reid,” Carson said. “He still will be pocket-vetoing everything and the president will be expanding his executive powers and who is to say how long our republic can stand that.” 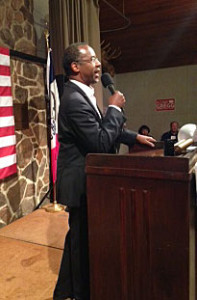 As Carson spoke, he strolled back and forth on a small stage in the Izaak Walton League banquet hall in Des Moines that had been decorated with American flags and political placards amid the hunting trophies displayed on the wall. Carson said one reason America can’t solve problems is because “political correctness” is keeping citizens from having “honest conversations” with one another.

“I hate political correctness,” he said. “I think it is a destructive thing. It’s antithetical to one of the founding principles of our nation — freedom of speech and freedom of expression.”

Carson was the closing speaker at the Polk County Republican Party fundraiser, then more than 100 people waited in line to get Carson’s signature on his book, which is titled “One Nation.”

Richard Hamann of West Des Moines, along with his wife and son, were among those waiting. Hamann hopes Carson runs in 2016 because he sees Carson as an effective communicator, in the mold of Ronald Reagan.

“(Reagan) communicated to the people, not at the people,” Hamann said. “Carson is right, talks to you and you understand what he is saying.”

And Hamann said Carson’s inspiring life story is an asset, too.

Thirty-two names were listed on a “straw poll” ballot handed out to those who bought tickets and attended tonight’s Polk County GOP fundraiser and Carson won. Some of Carson’s supporters came from surrounding states and arrived three hours before the event started and five hours before Carson arrived, to ensure they got in.