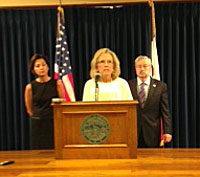 For the fourth consecutive year state officials are reducing the tax rates businesses pay into the government-managed fund used to pay unemployment benefits to Iowans. Teresa Wahlert is director of Iowa Workforce Development, the state agency that handled unemployment checks.

“In January of 2011, the Unemployment Trust Fund level was at $446 million,” she says. “Today, and the reason we’ve been able to have this great announcement today, is today that Unemployment Tax Fund is now $1.1 billion.”

The unemployment tax rates now set for Iowa businesses are the lowest they’ve been in 12 years.

The tax rates vary and are based on the lay-off track record of a business.

The Senate Oversight Committee will convene to quiz Wahlert over her management of the agency. Due to a computer malfunction in March, Iowa Workforce Development sent unemployment checks to 85 people who didn’t seek another round of benefits. Wahlert says it’s just a cost of doing business. 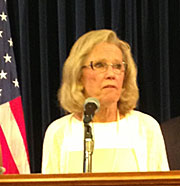 “Nobody is going to be penalized because it would cost us way more to collect the small number — it was only about $27,000 — and on a scale of a fund that has $1.1 billion in it, it’s really quit a small number,” Wahlert says. “And so we don’t want to penalize Iowans and we don’t want to spend our time going after that amount of money when we know what happened.”

Democratic senators have quesitons about an internal office memo which directed the department’s staff to stay quiet about the glitch.

“Staffers were told to do their job,” Wahlert says, “and so a lot of times people especially with an agency that is as large as ours spend time talking and visiting about things and we want our people to work on their important assignments.”

Governor Terry Branstad says his Workforce Development director has his “full support” as she prepared to appear before the legislative committee.

“I think Teresa with her background in business and with the Des Moines Partnership has a perfect background for this job and I think she’s done a really good job,” Branstad says. “…I feel confident that she’ll be able to answer all the questions and accusations that are thrown at her.”

This past spring Democrats in the Senate accused Wahlert of trying to tilt unemployment cases in favor of businesses by firing the chief judge in charge of the administrative law judges who handle the cases and putting herself in charge.

Branstad and Wahlert made their comments this morning during the governor’s weekly statehouse news conference.