You are here: Home / Business / U.S. Chamber of Commerce ‘all in’ for GOP’s Joni Ernst for U.S. Senate (AUDIO) 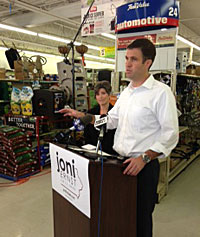 Rob Engstrom of the U.S. Chamber of Commerce with Joni Ernst.

The U.S. Chamber of Commerce has endorsed Republican Joni Ernst in Iowa’s U.S. Senate race. Rob Engstrom, the group’s national political director, said today they’re “all in” for Ernst because her opponent is “actively hostile” toward businesses.

“In any senate race across the country, the choice couldn’t be more clear where you have somebody in Congressman Bruce Braley who is a personal injury lawyer. He’s made a career suing businesses,” Engstrom said. “…He is the face of the problem in Washington, D.C.”

Engstrom spoke during an event at an Indianola hardware store, praising Ernst as an advocate of the free enterprise system, but directing most of his remarks at Braley.

“Whether it’s chasing chickens around his neighbor’s yard and threatening lawsuits, whether it’s pretending to be a farmer, there’s not enough duct tape in aisle three to fix Mr. Braley’s failed record in Washington, D.C.,” Engstrom said, as Ernst laughed.

“I do truly hope to have the opportunity to fight the good fight for good, solid, pro-growth economic policies for Iowans — both employees and employers — in the United States Senate,” Ernst said at the event inside McCoy Hardware.

AUDIO of U.S. Chamber of Commerce event in Indianola, 16:00

Braley, her opponent, told reporters an hour later that Ernst will find the endorsement from the U.S. Chambers of Commerce to be a “liability.”

“They are strongly opposed to increasing the minimum wage, which would give 300,000 a pay raise — 20 percent of the workforce,” Braley said after a campaign stop in Des Moines. “And the fact that they’re another organization that is financed by the Koch brothers should be no surprise to Iowans as to why they chose to endorse my opponent.”

The Koch brothers are billionaires who are expected to spend $300 million this election cycle to back conservative candidates and causes.